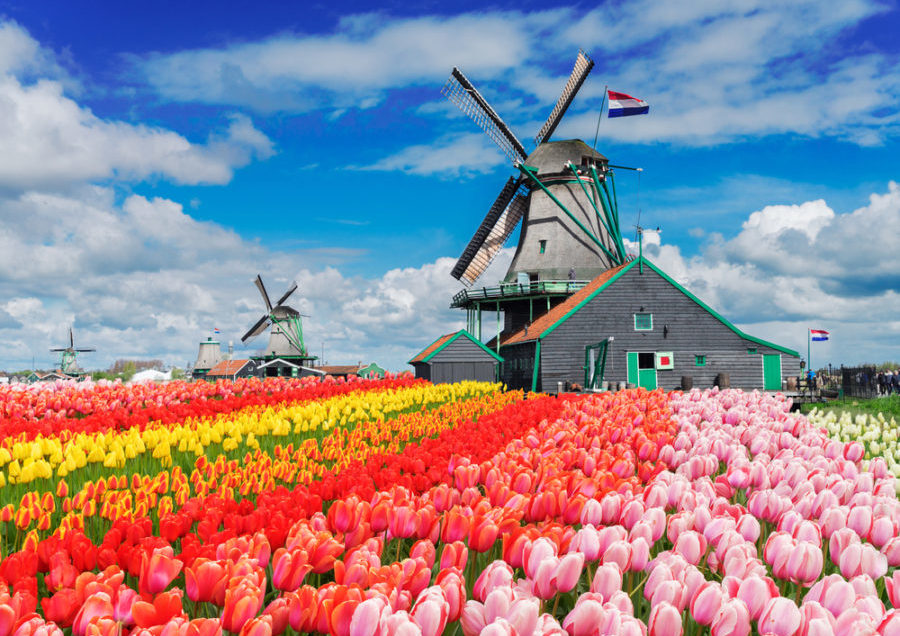 Tulips and The Netherlands go together like flowers and rain. That’s because every Spring, the fields between Amsterdam, Leiden and the coast of the North Sea become a fragrant carpet of spectacular color, as acres and acres of tulip bulbs bloom in all the colors of the rainbow. Rows of green, yellow, purple, magenta and coral delight visitors with their hue and fragrance.

You can tour this region – and see its floral delights – on the “Tulip Trail”. The Netherlands Tulip Trail starts in Haarlem in the north, meanders south through Lisse to the famous floral gardens at Keukenhof, and then ends in Leiden. The route is also known as the Bollenstreek (Bulb Region) Route or the Bloumen Route (Flower Route). Driving the Tulip Trail is easy as the entire route is only about 30 miles long. Of course, you’ll want to take it slow, as there is so much to see!

The Netherlands goes all out for its Spring flowers. Crocuses and daffodils bloom first in early Spring, followed by hyacinths, and then the long-anticipated tulips. Summer flowers include gladioli, dahlias and carnations. The months-long flower season celebrates all aspects of Dutch “flori-culture”, with big parades, art displays, music festivals and flower-themed cooking!

Why a Tulip Trail? Why The Netherlands?

Thought to have originated in the mountain ranges of Central Asia and then cultivated in the Ottoman Empire (modern-day Turkey) for years, the tulip is a bulbous Spring-flowering plant of the lily family. The name “tulip” is thought to be derived from a Persian word for turban, which the flower resembles. Tulips were introduced to The Netherlands at the end of the sixteenth century.

So how did they get to The Netherlands?

From the Dutch Review: The most widely accepted story is that Oghier Ghislain de Busbecq, who was Emperor Ferdinand I’s ambassador to Suleyman the Magnificent, ruler of the Ottoman Empire, introduced them. The story goes that in the 1560s, a Flemish botanist named Carolus Clusius was made the Director of the Hortus Botanicus (Botanical Garden) in Leiden. He had been hired by the University there to research medicinal plants. While at Leiden, de Busbecq, who was his friend and who had seen the beautiful flowers growing in the palace gardens of Suleyman the Magnificent, decided to send him a few for his garden. Clusius’ cultivation of tulips in the Leiden botanic gardens laid the foundations of the Dutch tulip bulb industry.

Tulips were seen as rare and exotic plants, and once introduced, Europeans of all income levels became fascinated with them. Sold on the futures market, contract prices for bulbs of the recently introduced and fashionable tulip reached extraordinarily high levels and then dramatically collapsed in February 1637 in what is considered the first recorded speculative bubble. Fortunes were made and lost overnight by the wealthy as well as the middle-class who borrowed in order to invest.

(If you want to know more about this fascinating era in Dutch history, there is plenty of excellent fiction written about Tulip Mania, including Tulip Fever by Deborah Moggach, which was subsequently made into a 2017 movie. And The Tulip Bubble is an interesting documentary about the era.)

Large bulb fields north and south of Haarlem are a feast for the eyes when in bloom. Just a quick drive or bike ride from Haarlem’s city centre, you’ll find yourself surrounded by millions of tulips, crocuses, daffodils and hyacinths. For even more floral delight, watch the Flower Parade – 20 huge floats made of thousands of flowers and 30 lavishly decorated cars follow a 42 km route starting in Noordwijk and ending in Haarlem. After arriving in Haarlem the floats are displayed on the Grote Markt so you can see them up close.

One of the world’s most beautiful planned gardens, this park in Lisse, between Amsterdam and The Hague, showcases 7 million blooming bulbs (that’s right – 7 million!) on its grounds and many other floral displays in indoor pavilions. Open for only 2 months a year, the gardens are a big tourist draw. Park hours vary, so confirm with Keukenhof Gardens for the opening times before you visit.

The quaint, old city of Leiden was the town that the Pilgrims lived in for 10 years before heading for the New World on the Mayflower. Leiden also has the oldest University in the Netherlands – the place where Carolus Clusius worked and studied when he received that first tulip bulb from his friend, Oghier Ghislain de Busbecq. Be sure and visit the Leiden Botanic Gardens (Hortus Botanicus Leiden) – the oldest botanical garden in The Netherlands (1590). The current mission of the Hortus is to “manage a living plant collection for research, education and for public interest”. Over the centuries the majority of the plant collections have come from Southeast Asia and East Asia. The Clusius Garden gives you a sense of what the Hortus was like around 1600, when Clusius cultivated his treasured tulips.

The safest bet for hitting peak tulip time is to go around mid-April, in the middle of the opening dates for Keukenhof Gardens. Always be prepared for an early or late blooming season, though. After all, exactly when the tulips bloom is always up to Mother Nature.

Contact Dragon in Your Pocket and we can put an itinerary together for you, book your tickets, or guide you on a private or small-group tour of The Tulip Trail. 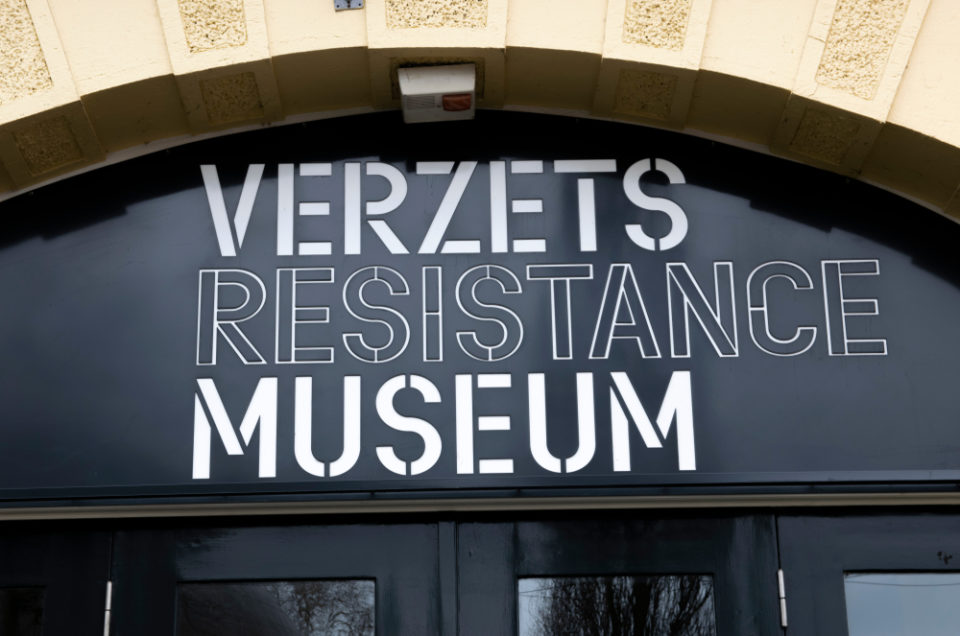