The North of England and Lowlands Scotland Road Trip 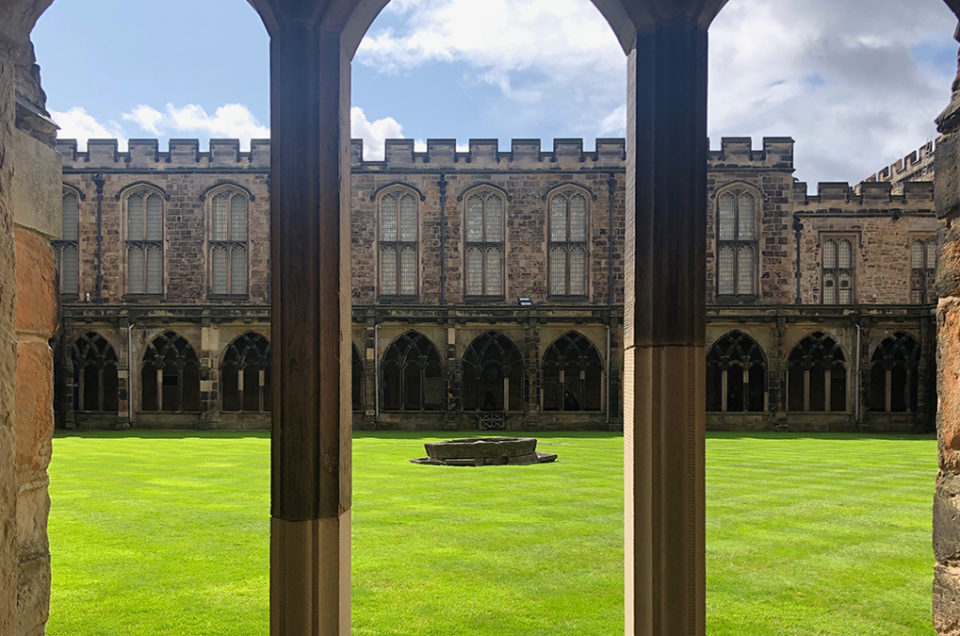 The North of England offers not only a sweeping arc of interesting historical spots (this area was the Roman frontier, after all), but also incredibly varied terrain (moors, mountains, North Sea, lakes, sweeping beaches), beautiful abbeys, and religious sites, intriguing art galleries and museums, and some of the best sports teams (think Liverpool Football Club, and sporting opportunities (mountain rambles and coasteering anyone?) available. 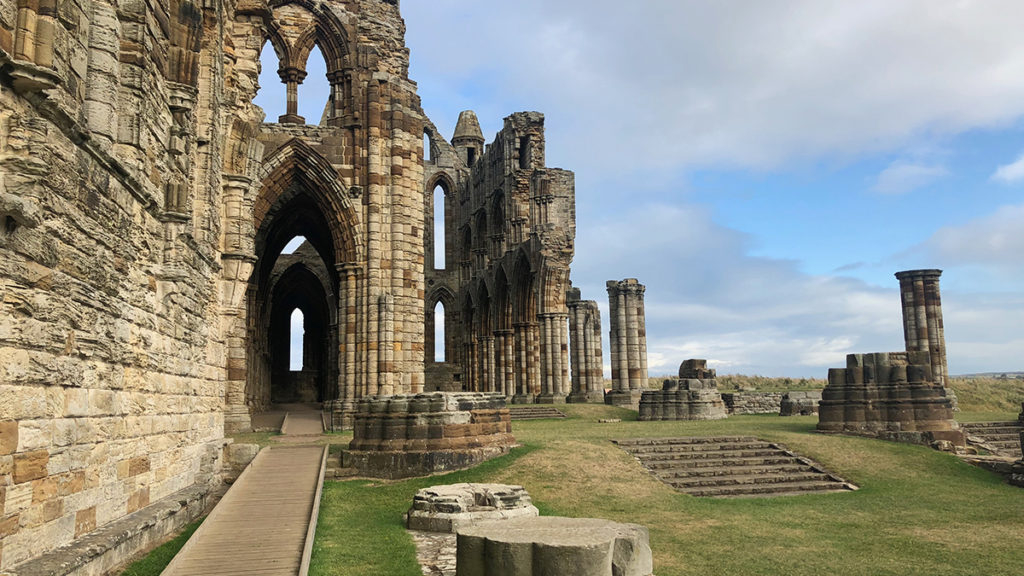 Start your North of England road trip in Manchester

A great driving adventure starts in Manchester, a former textile powerhouse that’s transforming itself into a multicultural, multifaceted international powerhouse. You can fly directly into Manchester, or take a short 2-hour train journey from London to Manchester. Stay in the city center for a day or two and acquaint yourself with the city and its attractions.  Some of our favorites: People’s History Museum, Chetham’s Library, Manchester Art Gallery, Museum of Science and Industry, and the National Football Museum (note that football means soccer in the UK as well as the rest of the world, excepting the US).

Early on your first driving day, pick up your rental car in the city center or at the airport, then head east an hour and a half (72 miles) to the charming walled town of York, a medieval economic powerhouse in the North of England. York, named Eboracum by its Roman founders, has also been Anglian, Saxon, Viking, Norman, and now English (and British), so there are layers and layers of history in this walled town. Stay a couple nights. Head to Jorvik Viking Center to learn about some of the first rulers after the Romans. Walk the walls and learn about the War of the Roses in the Henry VI and Richard III Experiences within the walls, cruise on the rivers Ouse and Foss, explore the history and art museums to learn about the broad sweep of history here. 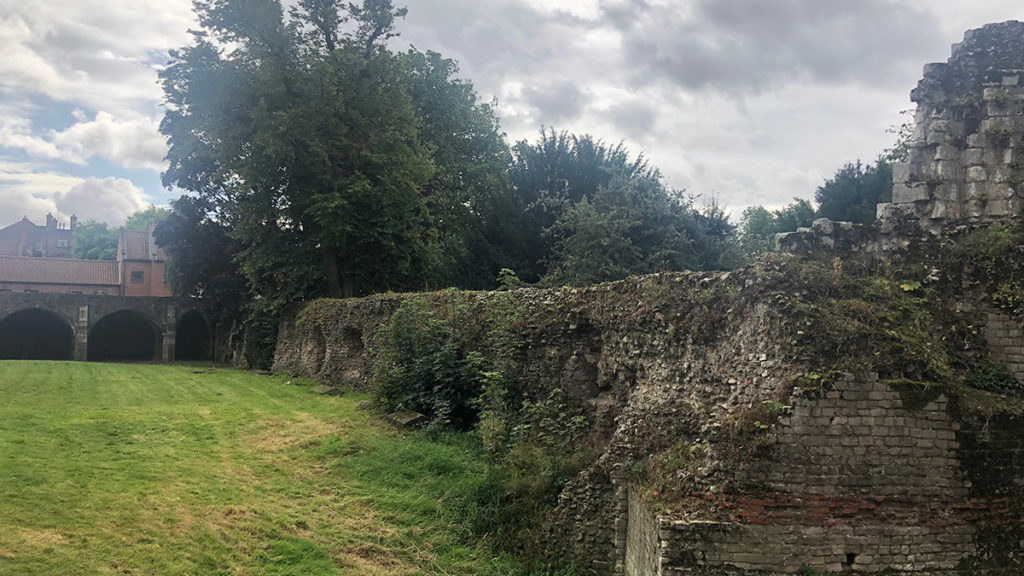 Make sure you reserve a table at Skosh, the incredibly inventive restaurant in York. Ramble through The Shambles, inspiration for Diagon Alley and Hogsmeade in the Harry Potter films, and pop up to House of the Trembling Madness for a meal (and maybe a pint) in interestingly eclectic surroundings.  Other favorite spots: York Minster (begun in the 600s), Merchant Adventurers’ Hall, Barley Hall, Clifford’s Tower, and the National Railway Museum. 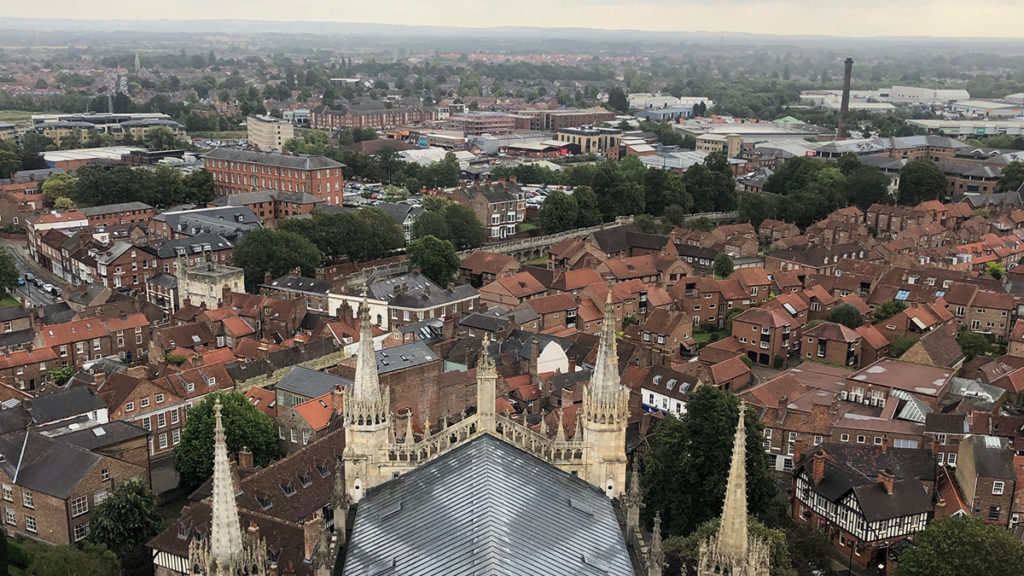 After your York visit, your North of England road trip continues across the moors (striking terrain indeed!) for just over an hour (49 miles) to the coast and Whitby. Walk up the 199 steps to the Church of St. Mary and Whitby Abbey, Bram Stoker’s inspiration for his novel Dracula, and wander the magnificent ruins. Admire the sweeping vista where sea meets shore from the cliffs. And if you’re hungry, enjoy some fish and chips – Whitby is famous for them. Before leaving Whitby, you can also walk up the lighthouse and learn more about Captain Cook’s history at the local museum.

Later in the day you might stop in Durham, another medieval powerhouse, as you head north up the coast. Some fantastic spots to explore in this hilly walled town include: Durham Cathedral, Durham Castle (one of the university’s residence halls is within), the Oriental Museum and the Museum of Archaeology (both part of Durham University), and the Botanic Garden on a beautiful day. Durham is only another 57 miles north, a drive of just over an hour. 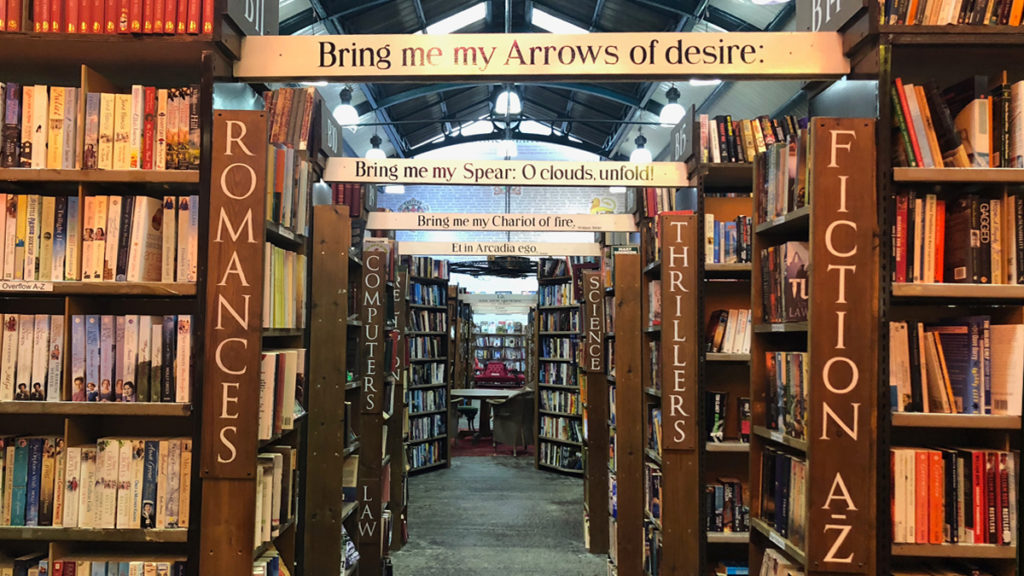 Another hour’s drive (over 53 miles of beautifully winding roads) through the North of England brings you to the bucolic village of Alnwick, home of Barter Books, the largest second-hand book shop in the UK. Located in the disused train station, the shop is beautifully laid out, has rare first editions (when we were last there, a Chaucer first edition was available), and a charming cafe. Stay at the Dirty Bottles Inn, a wonderful small inn above a pub. Visit Alnwick Castle (used in filming the first two Harry Potter films, as well as some episodes of Downton Abbey) and Gardens (with an absolutely gorgeous bamboo maze and an intriguing Poison Garden). Dine in the Titanic’s twin dining room at the White Swan Hotel down the street.

If you want a more physical challenge, go coasteering, kite surfing, or windsurfing in the nearby Northumberland Area of Outstanding Natural Beauty (AONB) as you head up the coast. Other interesting experiences and attractions nearby include Bamburgh Castle and beach, as well as Lindisfarne (Holy) Island, with its priory and castle – both musts for any religious history or British history fans. Bamburgh boasts lovely accommodation as well. 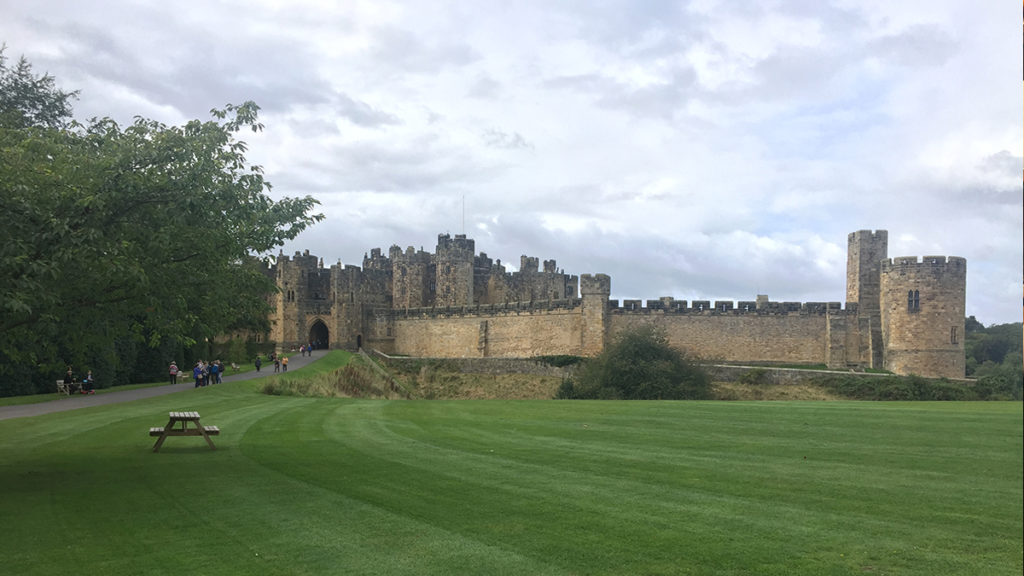 The road trip continues: crossing over into Lowlands Scotland

An hour and a half’s drive (76 miles) along verdant byways gets you across the England-Scotland border and to Edinburgh, legal and artistic capital of Scotland. Immerse yourself in Scottish history, art, and nature in this beautiful city. Walk the Royal Mile, exploring whatever takes your fancy. You’ll be spoilt for choice along this Old Town high street starting at Edinburgh Castle and ending at Holyroodhouse, the Queen’s residence when in Scotland. Hikers will enjoy climbing Arthur’s Seat (only a 30 to 60 minute walk) — and get a fantastic view of all Edinburgh and the ocean. Royal watchers will want to tour Holyroodhouse and possibly the Royal Yacht Britannia, amongst other locations. History fans will be intrigued by spots like Mary King’s Close, a section of Old Town now underground, closed and bricked up in the 1700s, and full of historic (and slightly spooky) objects. Literature aficionados will want to visit the Writers’ Museum, off the Royal Mile, dedicated to three Scottish writers: Robert Burns, Sir Walter Scott, and Robert Louis Stevenson, or climb the 288 steps to the top of Scott Monument, dedicated to Sir Walter Scott. You’ll want to spend some days (and nights) in Edinburgh, soaking up the atmosphere, enjoying the dining and drinking, and learning about the city, whether you stay in Old Town, New Town, Haymarket, Leith or other areas in this gorgeous, historic place.

After you are sated with Edinburgh’s attractions, mosey over to Glasgow, on the west coast of Scotland, and only an hour and a half’s drive across the country (51 miles). On your way, you may want to stop and stretch your legs at the ruins of Linlithgow Palace, a favored residence of the Stewart kings and queens, and the birthplace of both James V and Mary, Queen of Scots. Or perhaps you might stop by Falkirk, and gaze at, and take a ride on, the Falkirk Wheel. This fairly new rotating wheel allows connection of the Forth and Clyde canals with the Union Canal by raising boats 24 meters, then passing them through two locks to the Union Canal – a truly exceptional example of modern engineering and a strikingly lovely appearance. 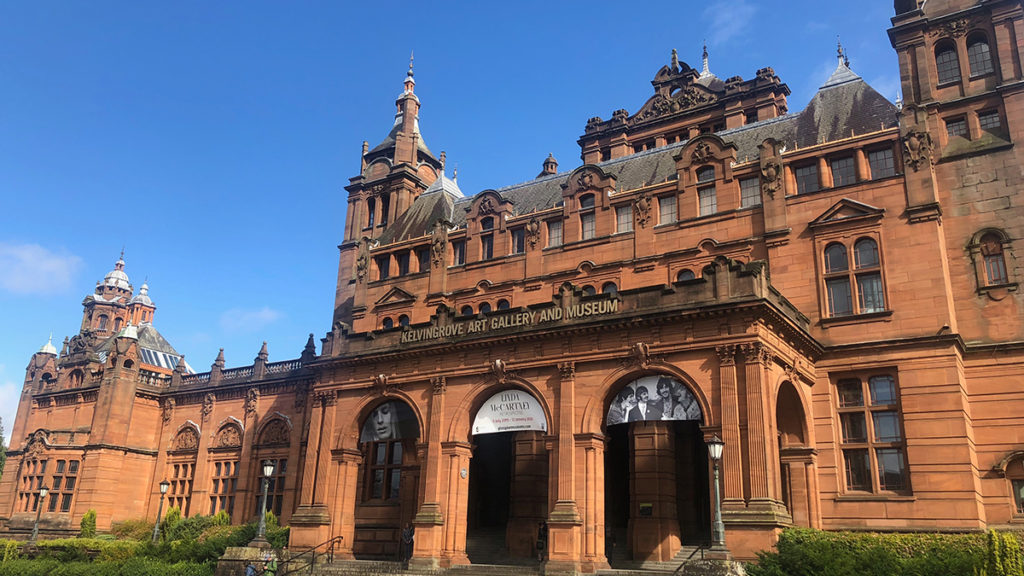 Many people dismiss Glasgow as merely an industrial city while in reality, it’s full of art, engineering, history, and outdoor beauty, rivaling any city. While in Glasgow: gaze in wonder at a Spitfire, the workhorse fighter plane that helped the Allies win World War II at the wonderfully varied Kelvingrove Museum, then venture further afield to the Botanic Garden and wander along the Ha’Penny Bridge. Search the city for signs of Charles Rennie MacIntosh, from lush Art Nouveau watercolors at the Kelvingrove to a reproduction of his and wife’s home, including the architecture, furniture, and paintings at the Hunterian at University of Glasgow. Ancient religious art abounds, from the early Christian/Briton stones at Govan Old Parish Church to St. Mungo Museum of Religious Life & Art. See some quirky and wildly interesting kinetic theatre at Sharmanka Kinetic Theatre near Merchant City, one of the vibrant neighborhoods in Glasgow. Interested in transportation? Head to Riverside Museum and see vintage bicycles, Mini Coopers, very early cars, and more – including a tall ship. 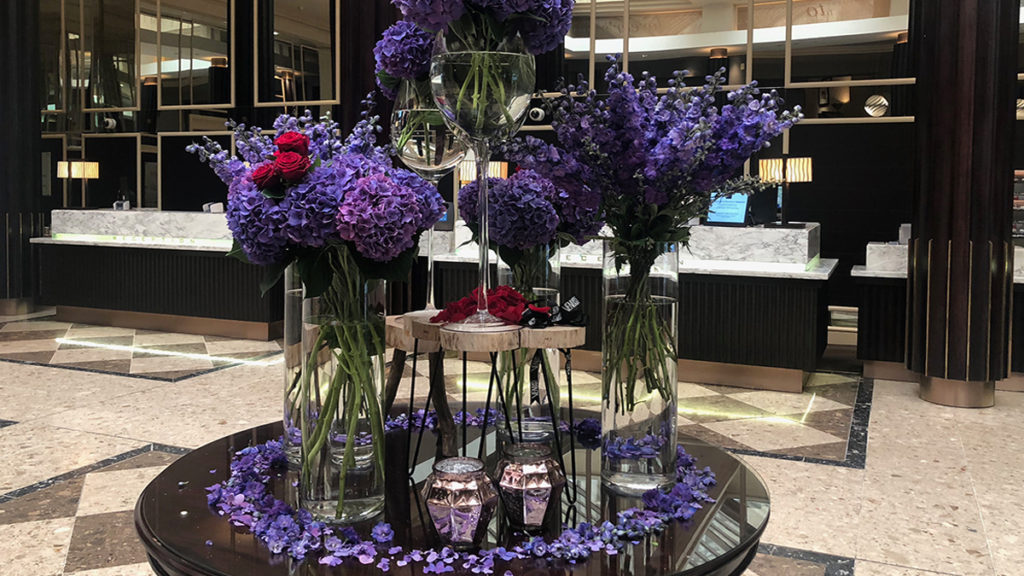 When your car journey is complete, simply return your car and head to your next destination, whether you fly back home from Glasgow’s international airport, train to Manchester (3-4 hours) or London (5 hours), or head to the continent, filled with a plethora of special memories from your road-trip exploration.

To start planning your dream trip, whether a road trip in the North of England and Lowlands Scotland, or something different, contact us – we will handcraft your dream adventure!!

whoah this blog is wonderful i really like reading your articles. Keep up the great paintings! You realize, a lot of people are hunting round for this info, you could help them greatly.

Glad to be one of several visitors on this awesome website : D.

The North of England and Lowlands Scotland Road Trip