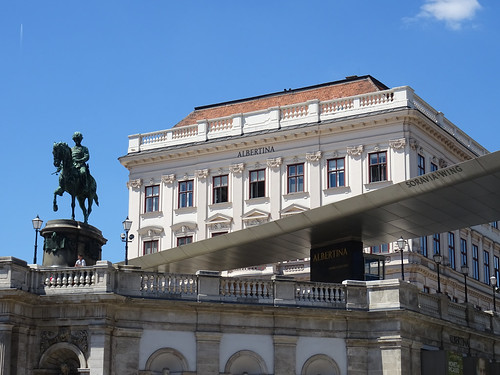 One of my favorite museums in Europe is Vienna’s Albertina Museum, which is housed in a former Habsburg palace in the city center near the State Opera. Put it on your tour of Vienna if you are an art or history lover. But it’s also a great way to experience the luxury (and decadence!) of the imperial Habsburg family.

The Albertina takes its name from its Habsburg founder, Duke Albert of Saxe-Teschen, the son-in-law of Empress Maria Theresa, who started the collection in 1776. However the palace was originally built in 1744 on an elevated position on top the ‘Augustinian bastion’ (which itself was erected as part of Vienna’s defensive city walls in the 1500s). In 1919, ownership of both the building and the collection passed from the Habsburgs to the newly founded Republic of Austria. The Albertina was heavily damaged by Allied bomb attacks during WW2 but rebuilt after the war and subsequently refurbished and modernized in 2003.

Tour the many famous masterpieces in the collection

The collection comprises over one million prints and 60,000 drawings, as well as modern graphic works, photographs and architectural drawings. Famous pieces such as Dürer’s “Hare” and his “Hands folded in prayer”, Rubens’ studies of children and masterpieces by DaVinci, Michelangelo, Cézanne, Klimt, Picasso and Rauschenberg are displayed in the rotating exhibition.

See opulence on display in the Habsburg State Rooms

You can also walk through twenty truly sumptuously decorated and restored Habsburg State Rooms in the former palace, with their magnificent Empire-style wall coverings, chandeliers, fireplaces and furniture. The Albertina’s website describes it even better than I could: “The Hall of Muses, a marble panelled hall with life-sized sculptures of Apollo and his nine muses, is a must-see, and lies at the center of the staterooms. You can also walk through the elaborately furnished Rococo Room, the Spanish Apartments that belonged to the Spanish royal family, and the rich Wedgwood Cabinet whose four wooden walls depict elaborate, classical scenes.”

The Albertina is located at Albertinaplatz 1, 1010 Wien (Vienna), accessible by the U-Bahn (the Vienna subway / underground system). The museum is free with a Vienna Pass (normal price is 16 euros per person).

NOTE: All photos courtesy of the Albertina Museum.